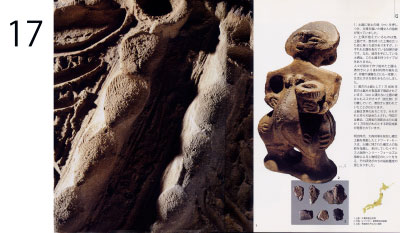 1 (p. 16):
Fingerprints of the Jomon potter, who was pressing clay coils on the surface of the pot for decoration, are visible.

Pottery making allowed the Jomon people to broaden the utilization of edible material, played an important role for storage and transportation, and thus brought a tremendous change to their life.

3 (bottom, p. 17):
It has been confirmed that shards from Aomori are dated between six and ten thousand years ago. Carbonized food remains on shards of less than 5 cm in size can be seen as evidence for those pots being used for cooking.

Pottery production emerged in different areas of the world individually. In China, there is a published study on pottery dated to twenty thousand years old from a cave in Jiangxi province.

Edward Morse, who discovered the Omori shell mound and excavated Jomon pottery in the Meiji era, pointed out the fingerprints left on pottery. He then suggested to Dr. Henry Faulds, a British medical doctor visiting Japan at that time, the hints to identify people by fingerprints, whose study became the origin of fingerprint analysis in the coming ages.