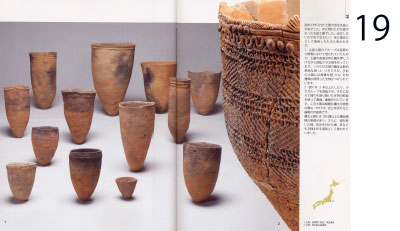 Pottery that first appeared in Japan were those with a round base and those with a flat bottom. Subsequently pottery with a pointed base emerged. Because they do not stay upright on its own, it is thought that they were used with stones as support or by burying into the ground.

1 (p. 18-19):
This type of pottery with a pointed base was used in eastern Japan from Nagano through Gunma prefectures. It features cord-wrapped dowel impressions that are produced by rolling and pressing a cord throughout its surface. The cords used for decorating pottery as seen on p. 18 are woven in a relatively simple way, but the one in front was decorated using several different cords woven in a complex way.

2 (front, p. 19):
The pottery in front is decorated with a cord woven with more than three strings, a small loop to roll over the surface, and a thin bamboo tube split in half to produce a semicircular cross section that was used to draw straight or curved lines. This pottery is representative of the Sekiyama type pottery that features detailed cord-marked decorations.

There are more than one hundred expressions of cord-marking decoration. In addition, string wrapped dowels, incised sticks and shells were used for decorating pottery.