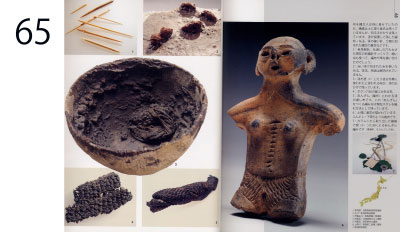 There are some clues that offer insight into the clothing that the Jomon people wore, although there are no remains of the fiber nor the clothing themselves: they are remains of yarn, balls of thread (clews), a needle made of bone, Jomon clothing engraved on clay figurines and so on, which had been protected by lacquer.

1 (top left, p. 64):
Needles made of bone and antler. Threading holes and the thickness of needles are similar to that of modern embroidery lace needles. They appear to have sewn up knitted cloth and/or hides by using thin strings as well.

2 (top right, p. 64):
Balls of thread that had been dyed with red lacquer. The dyeing technique and its use are unknown.

3: (middle, p. 64)
A piece of cloth that appears to have been used for filtering and/or painting lacquer, which was preserved due to the lacquer.

4 (bottom left, p. 64):
Knitted cloth with a hole seemingly made for a button.

5 (bottom right, p. 64):
A piece of cloth to filter lacquer that appears to be angin (knitted cloth). The method used to make asngin has remained as the technique for weaving reed screens in modern times.

6 (large pic, p. 65):
Depicted on the clay figurine are clothes, which look like fundoshi (a Japanese loincloth).