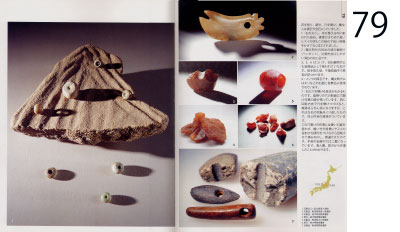 The Jomon people made gems and jewels by trimming, polishing and making holes in precious stones.

1 (p. 78):
A grindstone that was used to round and adjust the shapes of stones. Beads made of nephrite were produced by grinding with this kind of grindstone for long periods of time due to its high degree of hardness.

2 (top, p. 79):
A suspended decoration (pendant) from the early Jomon period. It is made of talc, which is relatively easy to work with.

4 (left, second from bottom, p. 79):
They are raw agate. In the Jomon period, it wasused as stone tools, such as a gimlet, and as ornaments.

7 (bottom, p. 79): These artifacts reveal the technique used in making holes in stones. Traces of the work that went into creating the hole remain on the cross section of the hole of the pendant. When a hole is made by rotating the object (a gimlet) in a single direction, spiral traces remain. In No. 7 (bottom, p. 79), concentric circles are present, which means the hole was made by repeated rotations in both directions.

When making a hole, instead of a hard stone tool they used a thin piece of bamboo or a bird bone with a sandstone attached to act as a file and cut through the stone by rotating and rolling it by hand. The stone tools in the front have holes that are twofold, which indicates they were worked on from both the front and the back.