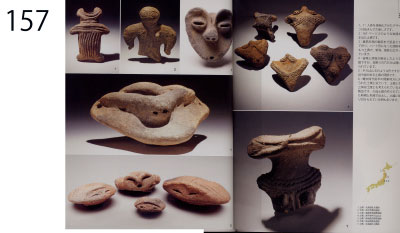 3 (top right, p. 156):
A clay figurine with a heart-shaped head that is created by extending the ridge of the nose to the outline of the face. This type of clay figurine was prevalent in Niigata and Fukushima.

4 (middle, p. 156):
This face looks like an integration of omission and exaggeration, but holes in the ears were still made.

5 (bottom, p. 156):
They look like the beads of an abacus, but they are clay figurine heads with eyes and eyebrows.

6 (top, p. 157):
Clay objects that are similar to the clay figurines that appeared in the middle of the early Jomon period in the Kanto region. They are thought to be either clay figurines or triangular clay tablets. They were excavated from the same area as the fire-flame style pottery and are thought to be from the same time period. They have been seen as motifs on pottery.