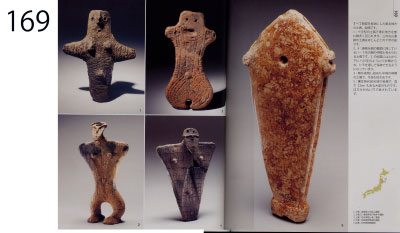 All are clay and stone figurines with tablet-shaped bodies from the Tohoku region.

1 (top left, p. 168):
A cross-shaped clay figurine, many of which appeared in northern Tohoku. Most of the figurines from the Sannai Maruyama site have this cross shape.

2 (bottom left, p. 168), 4 (bottom right, p. 168): These figurines are considered to be part of the group of figurines with a heart-shaped face whose nose ridge is connected to the outlines of the face. On the shoulders of No. 2 are two holes that slant downwards, through which a string can be passed and held in place.

3 (top right, p. 168):
A tablet-shaped clay figurine that was made during the middle of the period of when facial expressions appeared. The shapes of the arms and legs are not pronounced.

5 (p. 169):
A large stone figurine 23 cm in height from the early Jomon period. Only the mouth is expressed by a round hole.