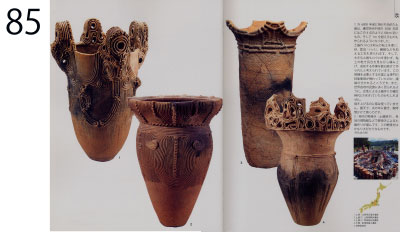 As seen in these four pieces, Jomon pottery, which started to be fired about 16,000 years ago, came to be made in sizes ranging from close to 80 cm to more than one meter by the middle of the Jomon period about 5,000 years ago.

In making pottery, they used local clay and exercised their ingenuity by adding sand, mica and fiber to the clay body (paste). It is thought that they did not use a potter’s wheel even for large-sized pottery but molded the form over several days by piling up the clay rings while checking the dryness.

In firing pottery, a kiln was not used. Pottery was fired by being placed in an open fire for several hours.

5 (right, small pic., p. 85):
Noyaki (firing pottery on the ground uncovered) in present day. Noyaki pottery making is popular at museums all over Japan. This noyaki is a large-scale one. (Akyu Tomono Kai).