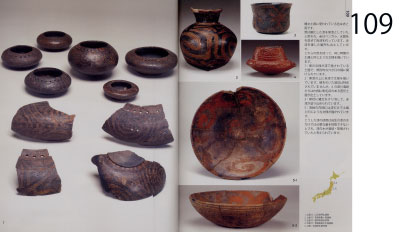 The only colors that were used for Jomon pottery are red and black.

Using these colors, they drew motifs and patterns similar to those found on pottery of the same time period.

1 (p. 108):
Decoration patterns are drawn with black lacquer. Holes perforated at regular intervals can be seen on the rim.

2 (top left, p. 109):
Decoration patterns and motifs were drawn with red lacquer on top of the black lacquer that was painted on the entire surface. The tool used for drawing lines has not been identified. However, the jar shaped pottery of No. 4 (right, second from top, p. 109), excavated from the Korekawa site, has brush marks on its inner surface.

3 (top right, p. 109):
The zoned cord markings were smoothed over and coated with red lacquer.

5 (middle and bottom, p. 109):
On the inner surface of the shallow bowl, decoration patterns, similar to those seen on other pottery, are drawn with just lacquer.

Considering the amount of lacquer that was used, it is impossible the necessary amount was collected solely from lacquer trees that grew naturally, and is therefore thought lacquer trees were cultivated.