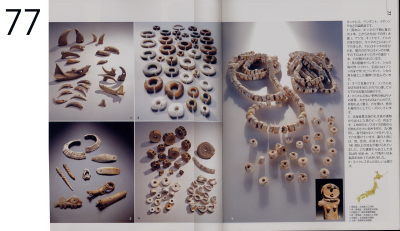 Ornaments, such as necklaces, pendants, and earrings.
1 (top left, p. 76):
The largest piece in the center left is the lower jaw of a fox, and the two pieces right above it are tusks of a Steller sea lion, above of which are two pieces of tusk of a northern sea lion. Two pieces at the right top are tusks of an eared seal, and below them are tusks of a fur seal and three pieces of tusk of a dolphin. At the right bottom is a tooth of a man-eating shark and the large piece above it is a lower jaw of a marten, and three pieces above it are claws of a hawk. All of them have a hole.

3 (top right, p. 76):
All of them are earrings made of stone. From the rift of the ring, the stone is put through the hole in the earlobe to hang as earrings.

4 (bottom right, p. 76):
The brown-colored round bones at the top left are that of a shark’s backbone, and the largest one at the top right is that of a dolphin’s. Shells were rounded into spherical shapes, and holes were created. Snail shells were cut in round slices and used as beads.

5 (large pic, p. 77):
Shell beads excavated from Rebun Island located in the northern tip of Hokkaido. They made many small shell ornaments by rounding pieces of Stimpson’s hard clam and creating holes using agate, found on the island, as a gimlet. More than one hundred pieces of shell beads on the neck, ankle and wrist of human remains were recovered from a grave. About four thousands five hundred shell beads and thirty thousands pieces of gimlets made of agate, including unfinished ones, were excavated from this site.