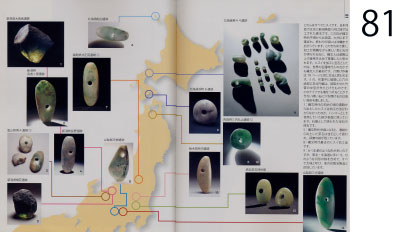 These pictures are all of nephrite. On the Japanese Archipelago, jade was processed mostly in the estuary region of the mouth of the Hime River in Niigata prefecture. The processed jade was transported as far as Hokkaido and Kyushu from around the middle Jomon period, and had spread to Okinawa by the end of the Jomon peiod.

It seems that the Jomon people highly valued stones from which beautiful color and luster can be obtained while being extremely hard and difficult to be processed, signifying their importance as more than decoration.

Among all the people in the Neolithic Age worldwide, the Jomon people were the first to process and make jewelry out of nephrite. The technique used to create a hole in nephrite is the same technique described on page 79.

In No. 3 (left, second from bottom, p. 80), at the bottom of the hole of the stone that broke in half during the hole-making process is a small cone, which was created by the hollow bamboo tube used. Highly advanced skills were required to create holes in these stones that not even a knife could dent.

5 (bottom left, p. 80):
Excavated gemstones from sites dating to the middle of the Jomon period have signs of having been polished, which indicates gemstones were now regarded as jewelry.

8 (bottom right, p. 80):
The oldest artifact of nephrite in the Jomon period.

9 (top left, p. 81):
Artifacts made of jade mostly have shapes similar to dried bonito. Including those seen in pictures 9 and 12, they are all referred to as taiju (large beads), distinguishing them from other jewelry made of stone.