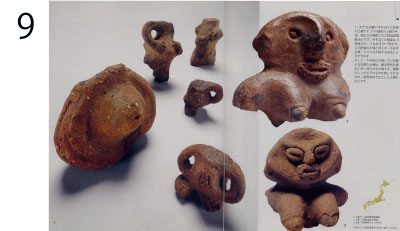 1 (five pieces on the left):
These are clay figurine torso parts of pregnant females placing hands on their pregnant belly. They are from the Shakado site in Yamanashi prefecture, where 1,116 broken pieces of hands, feet, and head etc. have been excavated. In total, six pieces of those with hands placed on their pregnant bellies were found, and these are five of them. Figurines with this same pose are also seen on the American continent.

Clay figurines with large breasts and no lower body is often found in the latter half of the Jomon period. They appear to symbolize an abundant harvest, similar to those found all over the world.