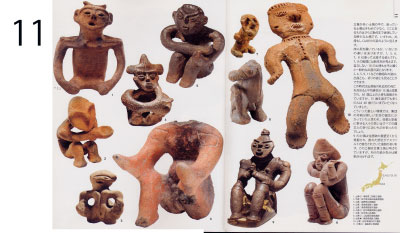 The majority of clay figurines are in a standing posture so ones in a sitting position are a rare find. These clay figurines sited here are even more unusual, showing their motions. Each of them appears to express childbirth or prayer.

With early infant death included, the average lifespan of the Jomon people has been estimated to be fifteen years. While there are some cases of bones of humans over sixty-five years old having been excavated, most of those that made it past the average lifespan did not live past forty.

We can imagine that, under the severe environments for survival, the existence of each group of people all depended on the birth of new life, and that their wish for a pregnancy and easy delivery were always in their prayers

Clay figurine No. 9 was excavated from the back wall area of a pit dwelling site. It has traces of asphalt being used to bond broken parts. This clay figurine is referred to as gassho (prayer hands) dogu, although opinion on whether it shows prayer or not is divided.