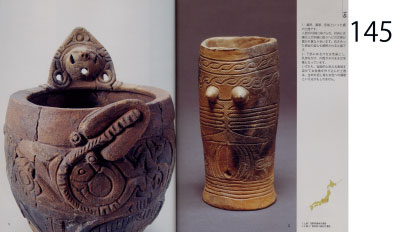 1 (p. 144):
This pottery has an intense, rich and sensual feel.
A female head facing the inside of the pottery, and a snake motif, which the Jomon people especially valued, is placed directly opposite the head on the outer surface of the pottery body. One interpretation is that these are male and female figures facing each other.

2 (p. 145):
Assuming the hole in the lower part of the pottery is a female organ and the two protrusions on the pottery body are breasts, the entire cylindrical pottery itself can be viewed as a female figure.
As in either case, pottery featuring a female figure combined with sensual expressions, can be interpreted as songs of praise for women who conceive and foster life.