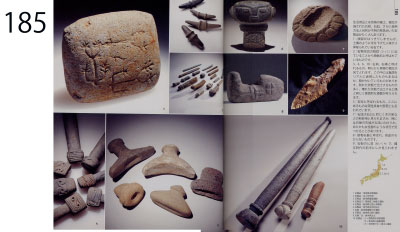 There are many stone objects with handiwork and decorations that are done in special ways, which include a sword-shaped stone object, grinding slab and many other stone objects that are apparently ritual tools but its purpose and use are unknown.

1 (top left, p. 184):
Although the heads are not clearly visible, three human bodies with arms at their sides are engraved on the stone.

2 (top right, p. 184):
They are referred to as dokko stone, since they resemble dokko, the iron club-shaped ritual tool of esoteric Buddhism.

3 (right, second from top, p. 184), 4 (bottom left, p. 184), 6 (top left, p. 185), 10 (bottom, p. 185):
Sword-shaped stone objects and stone rods. Their design is clearly based on the phallus. Some have realistic expressions of the glans penis, and others have faces. Many were excavated in fragments, the breakage considered to be intentional as in the case of the clay figurines found in shattered pieces.

7 (top right, p. 185):
Grinding slabs, like stone mortars, are thought to have been used for crushing nuts. However, sometimes they are found with the head of stone rods pointed toward the grinding stone, as if considered to be female sex organs.

8 (left, second from top, p. 185):
It is referred to as an imperial stone object, whose uses are unknown.

9 (right, second from top, p. 185):
A chipped stone dagger. They appeared only during the first half of the Jomon period.