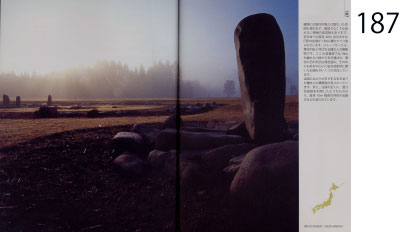 In archaeological sites, spaces separate from the dwelling areas exist. There are large-scale structures that could have been built only by a group of people.

There are two large circular arenas each more than 40 m in diameter built 130m apart. They are Jomon structures referred to as stone circles. Stones were brought to this Oyu site from a riverbed 8 km away and were placed to form a circular shape surrounding each arena. Inside the circular arena, a stone pillar was built at the center, and stones and dotted rock arrangements formed a radial pattern.

All over Japan, there are different Jomon stone structures made by arranging stones of various sizes. Also, at nearby dwelling sites, there are circular-shaped rock arrangements about 10 meters in diameter that were built using pit-dwelling sites.