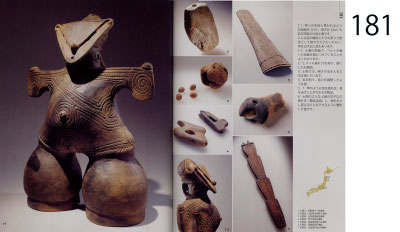 1-1 (p. 180):
A large clay figurine, 34 cm in height, wearing a mask suggestive of a leading role in rituals. This was unearthed as a complete piece.

There are artifacts that produce sounds, which may have been used as ceremonial implements at festivals of the Jomon people who may have looked like this clay figurine.

1-2 (bottom, p. 181):
This is a side view of a clay figurine, which clearly shows the mask is tied around the head using a belt attached to the mask.

4 (left, second from bottom, p. 181):
Whistles, whose finger holes appear to have been adjusted by carving the stones.

6 (middle right, p. 181):
A whistle that was made by reusing a shard of the spout of a teapot and modifying the shape to fine tune the tone quality.