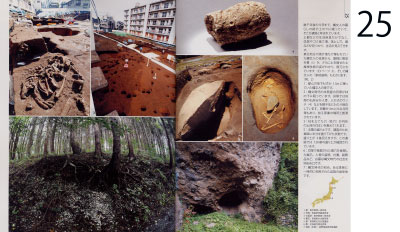 For the past several thousands years until this day, traces of the Jomon people’s life had been buried underground, referred to as remains. Not only tools for daily life, such as pottery, but also dwelling sites, garbage pits, trap pits and grave sites have been unearthed, through which we have started to get a glimpse into their daily life.

From pit-dwellings in Tohoku, northern Japan, which had been burnt and covered by soil, the original shapes of dwellings have been recovered (p. 23, pic. 3: top right). The recovered dwellings have roofs that have been thatched with bark then covered with soil. We can see the “household goods” of the Jomon people (p. 23, pic. 2: top left).

1 (top left, p. 24):
Bones of the Jomon people that had been buried only one and a half meters below the surface in the center of Tokyo.

2 (bottom, p. 24):
The shell midden of the Jomon period, which has not been excavated, is buried under a grove. In shell middens, calcareous ingredients from the shells had preserved human bones and human or dog feces (pic. 4: top, p. 25) for several thousands years. There is a shell midden with more than four meters of shell layers, which is thought to have been a place specialized in processing shells.

3 (right top, p. 24):
The holes of posts indicate an earthen floor that is circular in shape.

5 (middle left, p. 25):
A grave mound, dug into halfway vertically for survey purposes. In the picture, we can see three grave mounds. In this site, a total of one hundred thirty grave mounds have been identified.

6 (middle right, p. 25):
A reproduction of a grave pit excavated from a shell midden. Through the positions and conditions of human bones and grave goods etc., graves provide clues to understand the societies of the Jomon period.

7 (bottom, p. 25):
Rock cave that served as a temporary residence during some seasons at the beginning of the Jomon period.