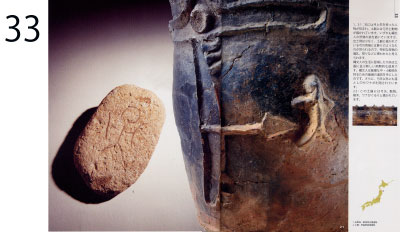 1 (p.32), 2-1(large pic., p. 33):
On the stone, a person holding a bow and arrow is engraved, and a person with a bow and an animal are decorated on the pottery. Each piece? depicts a hunting figure. This kind of decoration is rare among excavated pieces. A kind of ornament can be seen on both sides of the bow, so this pottery seems to have been used for special occasions such as hunting rituals and festivals.

Bows that emerged in the Jomon people’s lives were as equally revolutionary as pottery. The Jomon people came to obtain the best tool for hunting agile mid- to small-sized animals. In addition to these tools, pitfalls and traps were used to hunt animals.