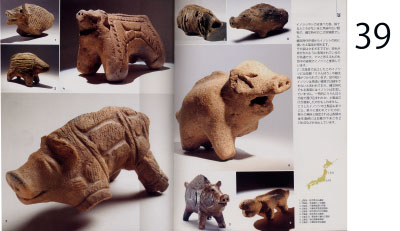 Wild boar and deer were two major hunting animals during the Jomon period. After being eaten, they had a wide variety of uses, so much so that there was nothing to be discarded.

After around the middle of the Jomon period, clay figures of wild boar appeared. Their shapes are varied, but commonly, the backcombed hair is expressed as a shape similar to a dorsal fin. Some pieces that look like bears can be speculated to be boars by the expression on its back.

2 (left, second from top, p. 38):
A striped pattern of urinbo (a mythical animal) is decorated on this wild boar figurine excavated from Hokkaido. It is said that wild boars cannot survive cold winters with deep snow because of their short legs, so they have not inhabited Hokkaido even since the Jomon period. The urinbo may have been temporarily imported by ship or only this clay figurine may have been brought there.

These clay figurines of wild boar seem to have been used for prayer. At the Kinsei site in Yamanashi prefecture that is supposed to have been a place for communal rituals, 138 pieces of animal-related objects, including a lower jaw bone of a baby animal, have been recovered.