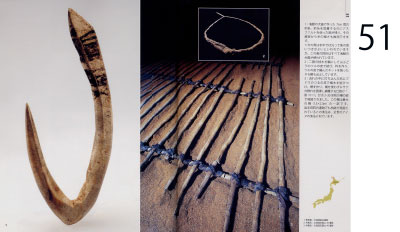 1 (p. 50):
A fishhook almost 7 cm long, made of a sea mammal’s fang. There are traces of asphalt, used for adhesion of the fishing lines, through which the thickness of the thread can be inferred.

It is said that deer antler is good for attracting fish because it shines in the water, but all the fishhooks used on this island were made of sea mammal fangs.

2 (top, p. 51):
A scoop net has been excavated as well. The circular frame was created by connecting the ends of a fork-shaped branch with wild grape vine bark. A net was made by weaving vine bark, which was spread over the frame.

3 (p. 51):
Eri, a device to catch salmon. Eri is made by putting up posts in a stream and connecting crossbars with vine bark to make a railing, which enables the guiding of the salmon to one area to be caught without the use of a net. About thirty pieces of eri of all sizes were excavated in the form of railings.

This is one part of the biggest railing (1.5 m x 2.3m). Traces of posts were excavated at the Shidanai site of Iwate prefecture as well. This fishing method is similar to what the Ainu practice in modern times.