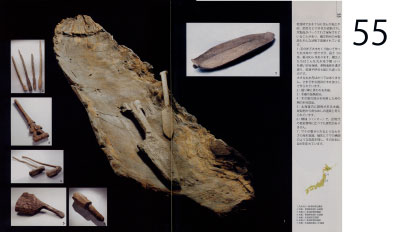 Clay, sand and peat that have absorbed large amounts of water in low and damp lands can cover wooden objects and prevent contact with outside air, thus preserving them from decay. Those wooden objects from the Jomon period were excavated in such conditions.

1 (large pic., center, pp. 54-55):
A part of a canoe 5 meters long and 80 centimeters wide, which was created by hollowing out a big tree trunk using a stone axe. The Jomon people crossed the Soya Straits and the Tsugaru Straits by paddling these kinds of canoes and reached the Sado and Izu Seven islands.

It was not only canoes that were made from trees but a variety of tools as well.

4 (second from bottom, p. 54):
Handles of wooden axes made from the forks of branches. They are unfinished.

5 (bottom left, p. 54):
Wooden objects. Similar pieces have been found in Hokkaido. Based on ethnological cases, this is thought to be a tool for tanning leather.

6 (bottom right, p. 54):
A hammer, which can bear comparison with ethnological material from modern ages.

7 (top, p. 55):
A wooden vessel large enough to load with salmon. On the bow of the vessel remains a projection that looks like a bear’s profile and eyes that are engraved on either side.