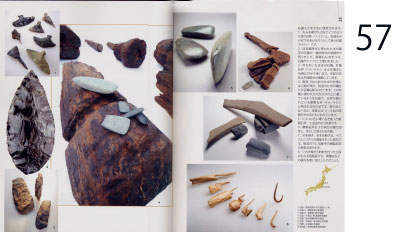 There are various kinds of stone tools.

1 (top left, p. 56):
Tanged stone scrapers with roundish edges that were used like knives, and stone drills with sharpened tips that were used to bore holes in animal skin and tree bark.

2 (left, second from top, p. 56):
Leaf-shaped stone tools that had been used in the Paleolithic era continued to be used until beginning of the Jomon period. This flaked obsidian was sharpened and used as a stone spearhead and knife.

3 (bottom left, p. 56):
Chipped stone axes, which were used as they were chipped without being polished. A chipped stone axe was attached to a handle for soil digging. The lower edge of the one in front is worn down.

4 (right, p. 56):
The end of a large tree more than 70 cm in diameter has traces of knife cuts, and a groove that was carved to hang ropes for transportation.

Stone tools that had been used for this kind of work are those placed on the piece of wood in picture 4, which are totally polished and referred to as polished stone axes. It is said that it takes three to four times longer to cut trees with these compared to iron axes.

5 (top left, p. 57):
Polished stone axes, which look like craft products, that are made of a kind of stone as hard as jade.

6 (top right, p. 57):
A handle bound to a polished axe from three directions with a cord, used as an axe.

7 (middle, p. 57):
Grindstones that function to sharpen knives and cut stones. In the picture, raw ore of the polished stone axe that was being cut is seen under the grindstone.

8 (bottom, p. 57):
Remains that indicate the manufacturing process of a fishhook made of deer bones. They may have been made using broken pieces of obsidian.