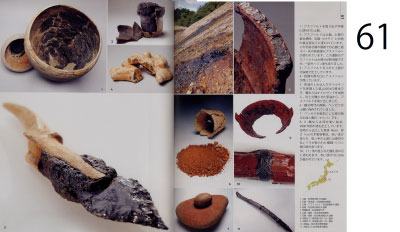 3 (right top, p. 60):
A pottery filled with asphalt was excavated from a site in Hokkaido.

4 (right, second from top, p. 60):
There are traces of asphalt on the fractured parts of stone figurines.

5 (left top, p. 61):
The site of a mining company that dug oil sand infiltrated with crude oil. The Jomon people heated oil sand and separated the oil from the sand, and thus extracted asphalt from crude oil.

6 (middle left, p. 61):
Red-ocher rouge, the pigment of the Jomon period, was preserved in a deep pot.

7 (bottom left, p. 61):
A grinding slab and a grindstone that have traces of powdered red-ocher rouge.

A wooden bowl 46 cm in diameter and 1 cm in thickness was excavated from a swamp. It is painted with red lacquer, and the upper part of the handle has traces of mother-of-pearl work where round caps of spiral shells were put.